2018 was a resurgence in vinyl record buying for me.  That's both a good and a bad thing.  Basically, I spent most of my extra money on adding to my collection.  That's awesome, and also expensive.  As I looked through my catalog of records I found that I bought twenty-one albums released in 2018 on vinyl.  With so many great albums still being released in the age of streaming, I thought I would highlight my ten favorite albums from 2018 that I own on vinyl.  To make my list the album had to be released for the first time in 2018.  That means, no reissues, remasters, special deluxe versions, exclusive releases or back catalog items are part of this list (and there were a lot of great ones this year).  If it was first released in 2018 and I bought it, it's eligible for this list.  So, what ten albums made my favorites list? Let's find out...


I had a great time trying to rank my top ten and moved a few in and out as I did so.  It's never easy to get those final positions in the list when you love so many albums, so before we get to the top 10 here are a few that just missed making the list.

Read more »
Posted by Brian Bartholow at 9:25 PM No comments:


Hello and welcome to the first edition of Tracks where we take a closer look at some of our favorite albums one track at a time.  Joining me for this blog is my good buddy, and longtime friend, Jay from the blog Timeout, Need More Popcorn.  As a brief intro, Jay and I  have been long time collaborators on radio shows, podcast, music and many other ventures.  We share a love of songwriting, guitars, and Buffy.  We spent four years podcasting about the hit TV show Buffy the Vampire Slayer via our podcast The Art of Slaying, and over ten years on our Continuous Play Podcast - Film Strip podcast. We have also written several songs together that you can find on all streaming services under the artist Brian Bartholow (that's me).  For the last several years we have discussed doing a podcast called Tracks, but time became a major issue.  We almost launched the podcast last year, but it just didn't make it.  When I decided to start this blog I approached Jay about doing it here in a different medium, so here we go.  Let's hope it works! 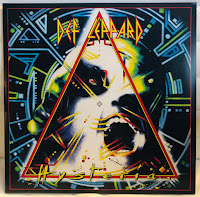 Hysteria... what can we say about it? It's one of the biggest albums of all time.  It's gone 12x platinum in the United States alone, receiving the coveted diamond status from the RIAA.  It spawned seven singles; 1 #1 hit (Love Bites), 4 top 10s, and 6 top 20s. Overall, the album has sold 25 million copies worldwide.  It took 4 years to make, and at the time of it's release was the most expensive album ever recorded at 5 million dollars.  To put that into perspective, the record needed to sell 4 million copies just to break even.

Read more »
Posted by Brian Bartholow at 9:13 PM No comments:

Email ThisBlogThis!Share to TwitterShare to FacebookShare to Pinterest
Labels: Tracks 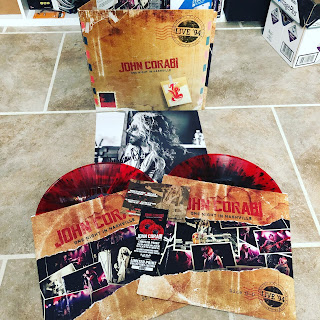 As I left the house on Saturday morning, I was not expecting any new vinyl to show up that day.  When I was informed that a record arrived at the house I scrambled to find out what it could be.  I checked my Amazon.com account and there was nothing there.  I racked my brain trying to figure out what it could be.  Once I returned home that afternoon, I looked at the package and was immediately overcome with excitement.  Rat Pak Records the return label said.  I knew exactly what I was receiving, but before we get into the package itself let's go back and tell you why I was so excited about this delivery.

The year is 1994 and the news has just hit the wire that Vince Neil has been replaced as lead singer in Motley Crue.  Neil had quit the band, or maybe he was fired, in 1992 over a spat with his bandmates.  His replaced is announced as a little known singer from a band called The Scream, John Corabi.  Motley Crue was coming off a massive success with Dr. Feelgood and a very successful hits release called Decade of Decadence.  They were on top of the hard rock world even though the music scene had changed and moved away from hard rock and heavy metal in favor of grunge and alternative rock.  This was before the explosion of the Internet, so finding out any information on John Corabi was virtually impossible unless you knew of his previous band, The Scream.  It wasn't until March of 1994 that Crue fans finally got a chance to hear the new singer in action when Hooligan's Holiday was released to radio and a video to MTV (back when they played videos).  Corabi was a major departure in style and sound from Neil.  He had a deeper, more soulful voice that was perfect for the heavier direction Crue seemed to be taking.  Some loved it, some hated it.  I was one of those that loved it.

An Introduction to Me... Brian 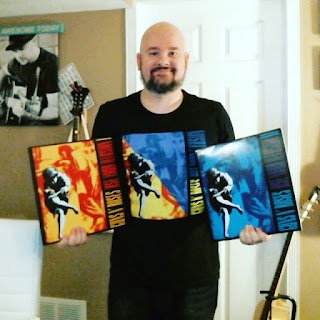 So you've stumbled upon this blog, likely because you love vinyl records like I do. That's awesome! Thank you so much for stopping by.  Now I am sure you are wondering to yourself, "Who is Brian?" and more importantly "Why should I read his blog?" Well, this is where I introduce myself and sell my blog to you.

As you've probably guessed, my name is Brian and I am a vinylholic (is that even a word?).  I have been a music fan since I can remember.  It's always pulled me in and from many directions.  My dad was a guitar player when he was younger (still is) and he loved music.  At the age of 8, he bought an acoustic guitar and began to teach me how to play.  It didn't stick at the time, but we will circle back to that in a few years time.  My mother played the piano and in fifth and sixth grade I took piano lessons.  Sadly, I stopped after sixth grade, but all was not lost because by age twelve I was once again in love with the guitar; this time it stuck!